All About the UDC Muirkirk Research Farm 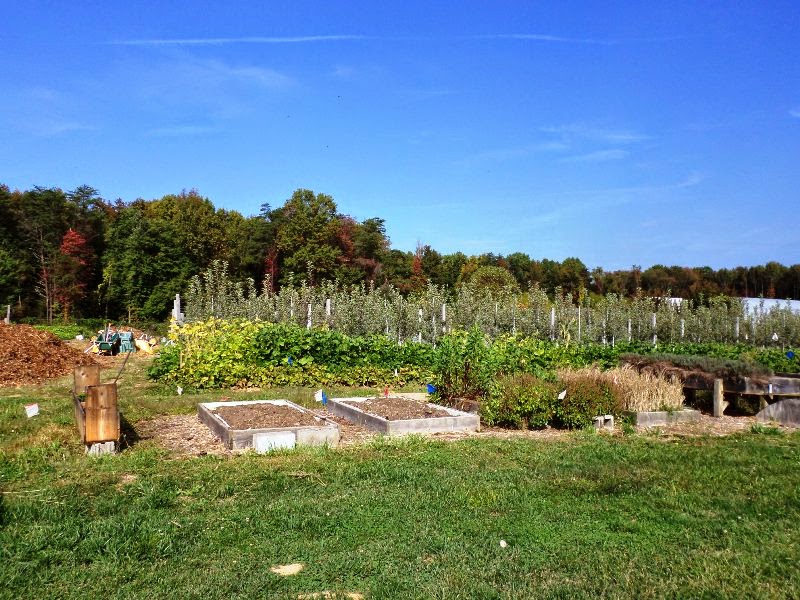 You've read about UDC's Muirkirk Research Farm many times throughout the Just CAUSES blog, but there is so much more to know! For starters, its formal name is the Muirkirk Agricultural Experimentation Station and the overall goal is to research and test techniques in sustainable and organic agriculture, applying them to an urban agricultural setting.

The University of the District of Columbia is a landgrant institution, receiving its landgrant designation in 1967. As the nation’s only urban landgrant, UDC must marry the aspects of a traditional landgrant institution with an urban environment. As our Agricultural Experiment Station, Muirkirk Farm must address those issues unique to urban areas. This aligns closely with the mission of CAUSES, which embodies UDC’s land-grant tradition:


CAUSES offers research-based academic and community outreach programs that improve the quality of life and economic opportunity of people and communities on the District of Columbia, the nation and the world.

The Sustainable Agriculture Program focuses on techniques to increase productivity in smaller, urban land areas, while limiting the use of commercial chemical fertilizers and toxic chemicals for pest control which can have harmful effects on the environment and human health.

Muirkirk Farm provides some of the means for offering local and nutritious food to the residents of D.C., many of whom are low-income and live in food desserts without access to fresh produce. These residents are food insecure.

What's on the farm?


The farm continues to expand. We now have four mobile greenhouses are built on rails, allowing a tractor to move them down a track. This allows us to grow crops year round and in the best available location on the farm - despite the season.
Our hydroponics system allow us to use technology to our advantage, growing more in smaller spaces and with an increased nutrition value.

An aquaponics system allows us to grow tilapia and vegetables in a self-sustaining closed loop system. More recently, we've installed a solar panel, a solar well pump and a 5,000-gallon cistern, increasing our self-sufficiency by generating our own power for irrigation and fertigation (more on that here). Finally, we are in the process of building an organic compost production facility.

As for what we grow, at any given time, you can find for example: beans, lettuce, collards, eggplant, Jerusalem Artichokes, tarragon, ginger, turmeric, mint, basil, Swiss chard, limes, squash, asparagus, Asian pears, raspberries, strawberries, blackberries and apples. The farm plans on reintroducing the pawpaw, a native fruit that has been likened to a cross between a banana and pineapple. 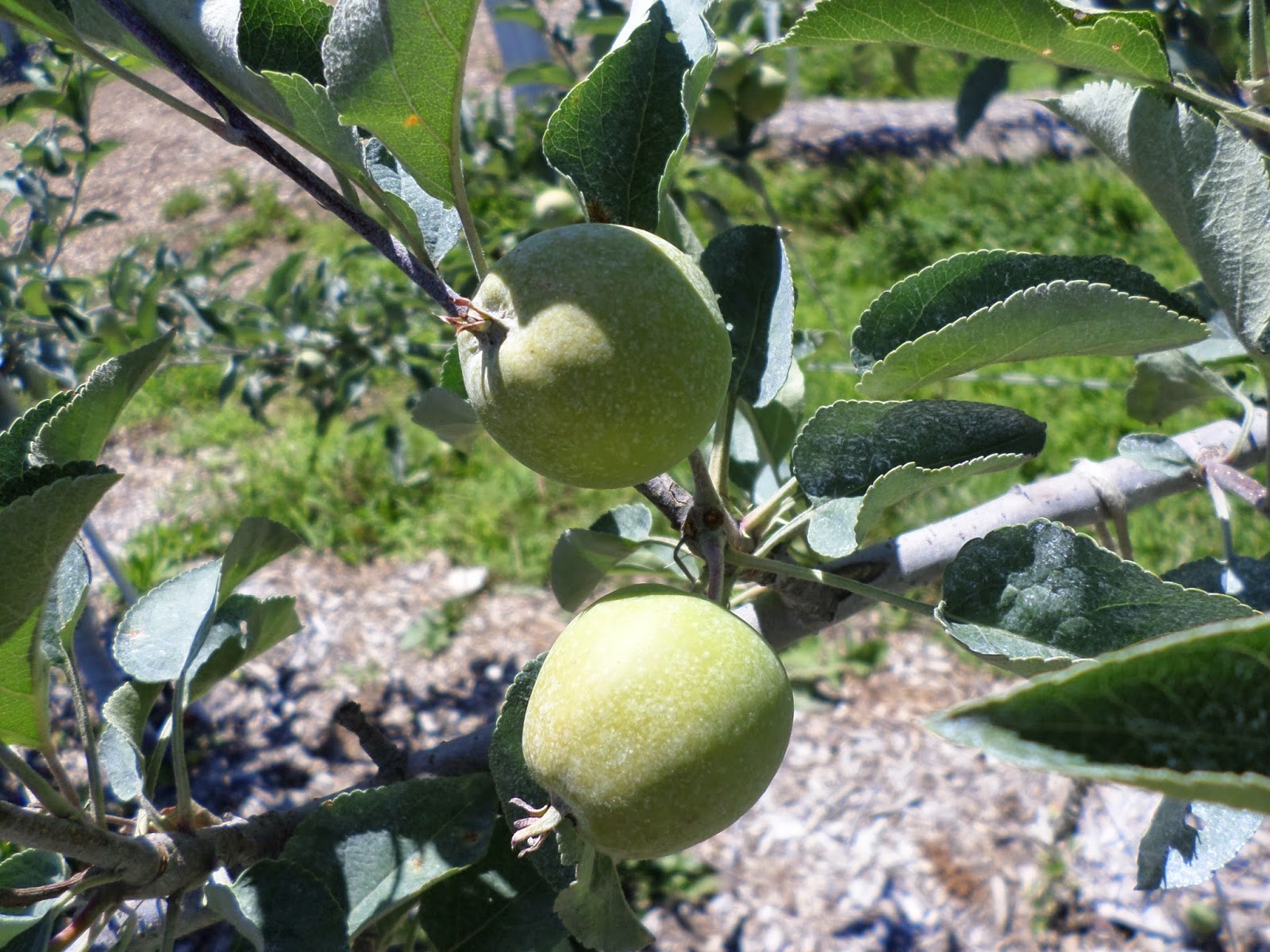 Fact - Bread for the City tends to Muirkirk's orchard. All of the fruit is donated to feed their constituents--the vulnerable residents of the D.C. This population rarely has access to fresh fruit.

Fact - Yes, the D.C. metro area has a native fruit.

Che' Axum, director, CAUSES Center for Urban Agriculture, spends most of the day farming, but he and his small team (Alemayehu Waggie, Yao Afantchao and Roy Lycorish) also spend a great deal of time applying experimental techniques and analyzing research. In order to plan for the upcoming year, it is useful to take this information and extract from the experiments to determine what crops do best in which locations. 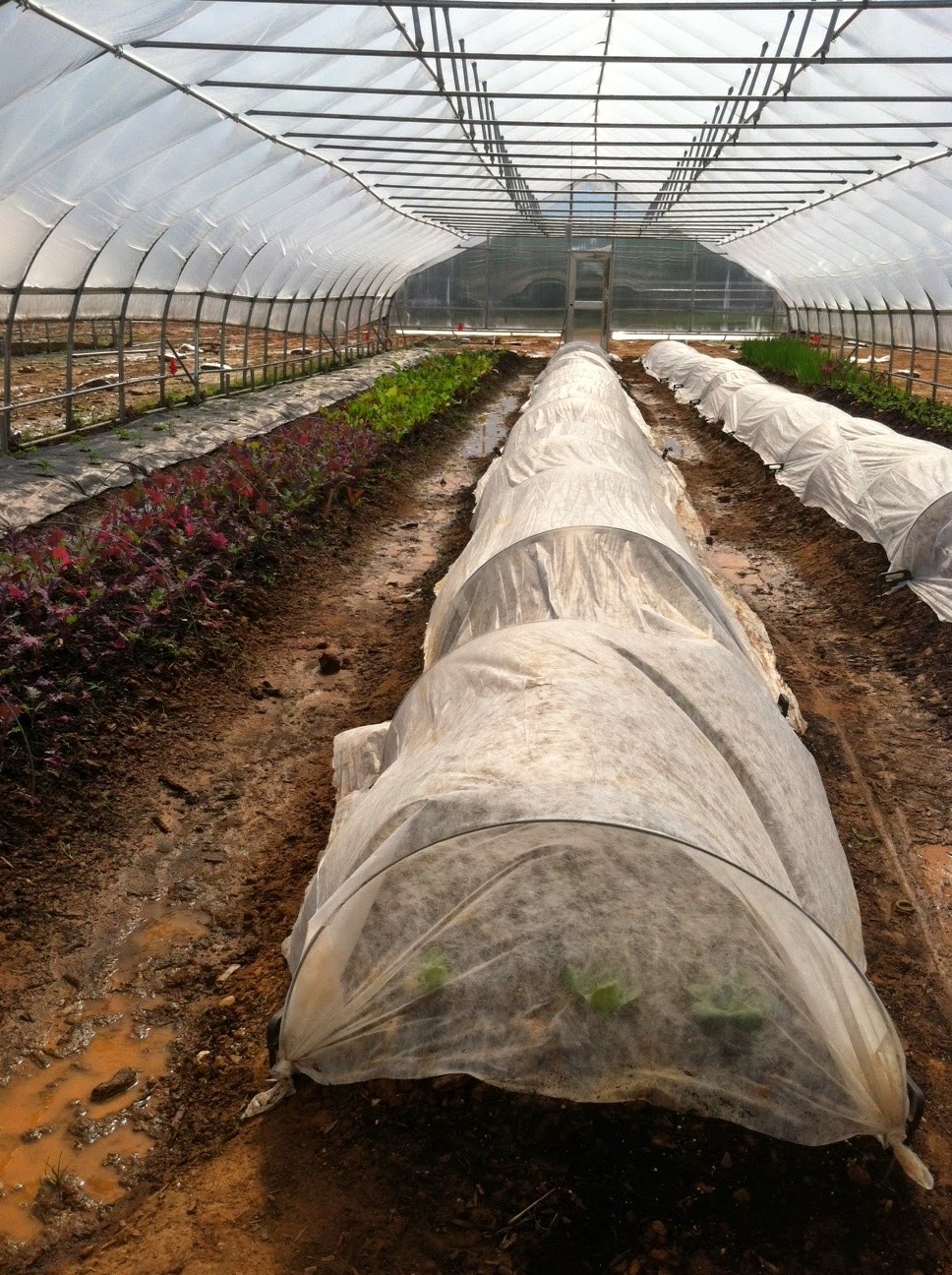 Upon visiting the farm, you may notice fields with rows of raised-bed crops growing out of plastic or cloth. Permeable cloth-covered crops can be watered directly through the cloth. The cloth does not keep as much heat and soil as with the plastic, but is does reduce weeds. Crops covered with plastic cannot be oversaturated, as the water slides off of the plastic.

The farm also experiments with close-space planting so that when city dwellers visit the farm, they can see how this technique might work for them and their small gardening spaces. Yet another simple experiment is growing vegetables in boxes with varying depths of soil. One of the newest experiments on the farm is small scale rice production (read more about the rice experiment). 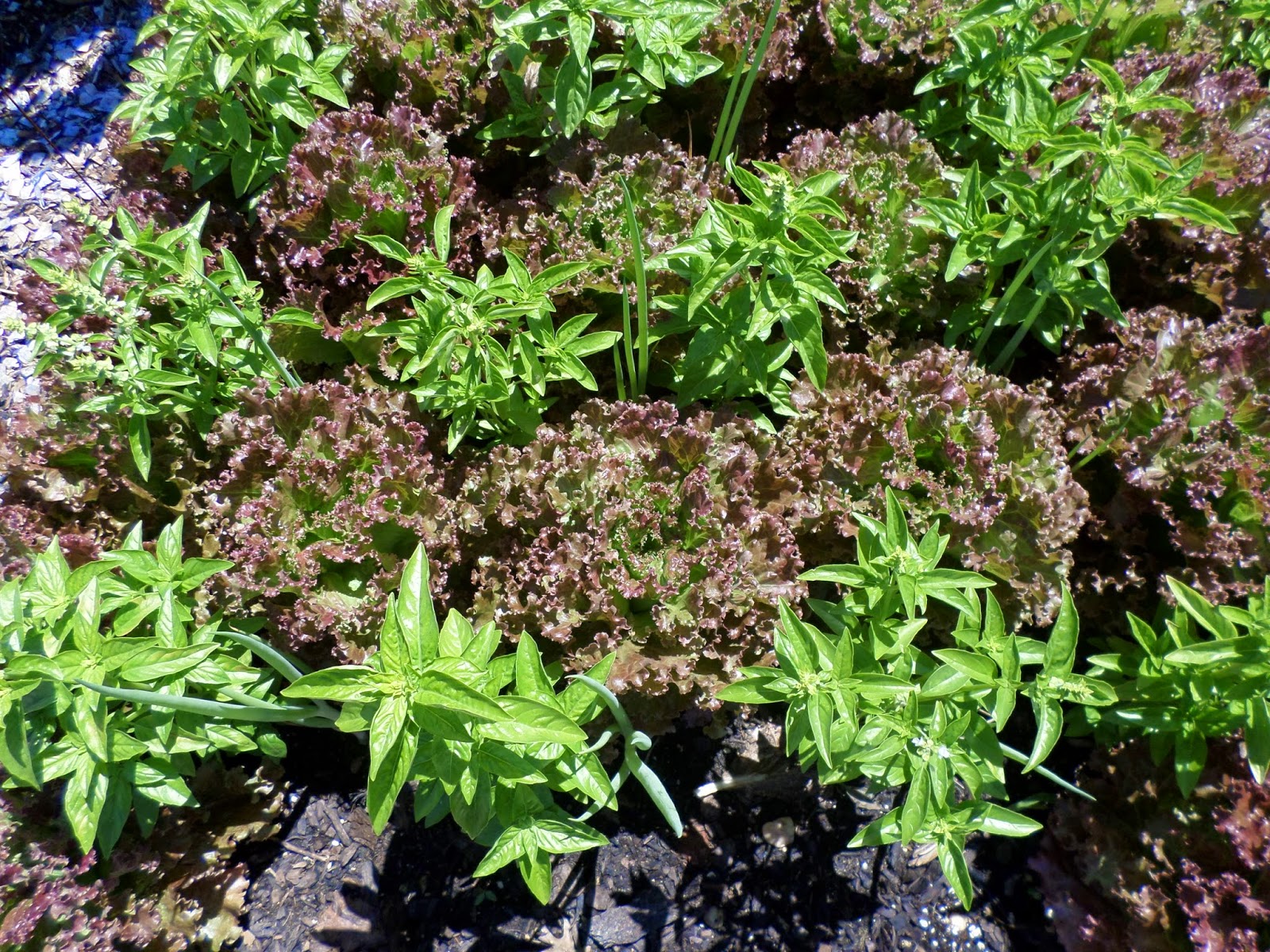 Sometimes, the experiments do not always yield positive results. For instance, this year's initial crop of blueberries did not yield. After analysis, it was determined the soil issues will need to be addressed before the blueberries will flourish. In 2013, a crop of mini broccoli did not produce a head and therefore could not be harvested. It was determined that asparagus can be grown, but needs another year to really proliferate. And finally, apples do not grow well in humidity, according to Axum.

By conducting experiments and analyzing the yields, the farm team can determine what to plant in the future (or not) or to do so using different variables and techniques and locations.

Farming in the City

Many of the research techniques utilized at the farm are innovative, but not necessarily new. These techniques are often geared for people to mimic techniques that can use in an urban setting. 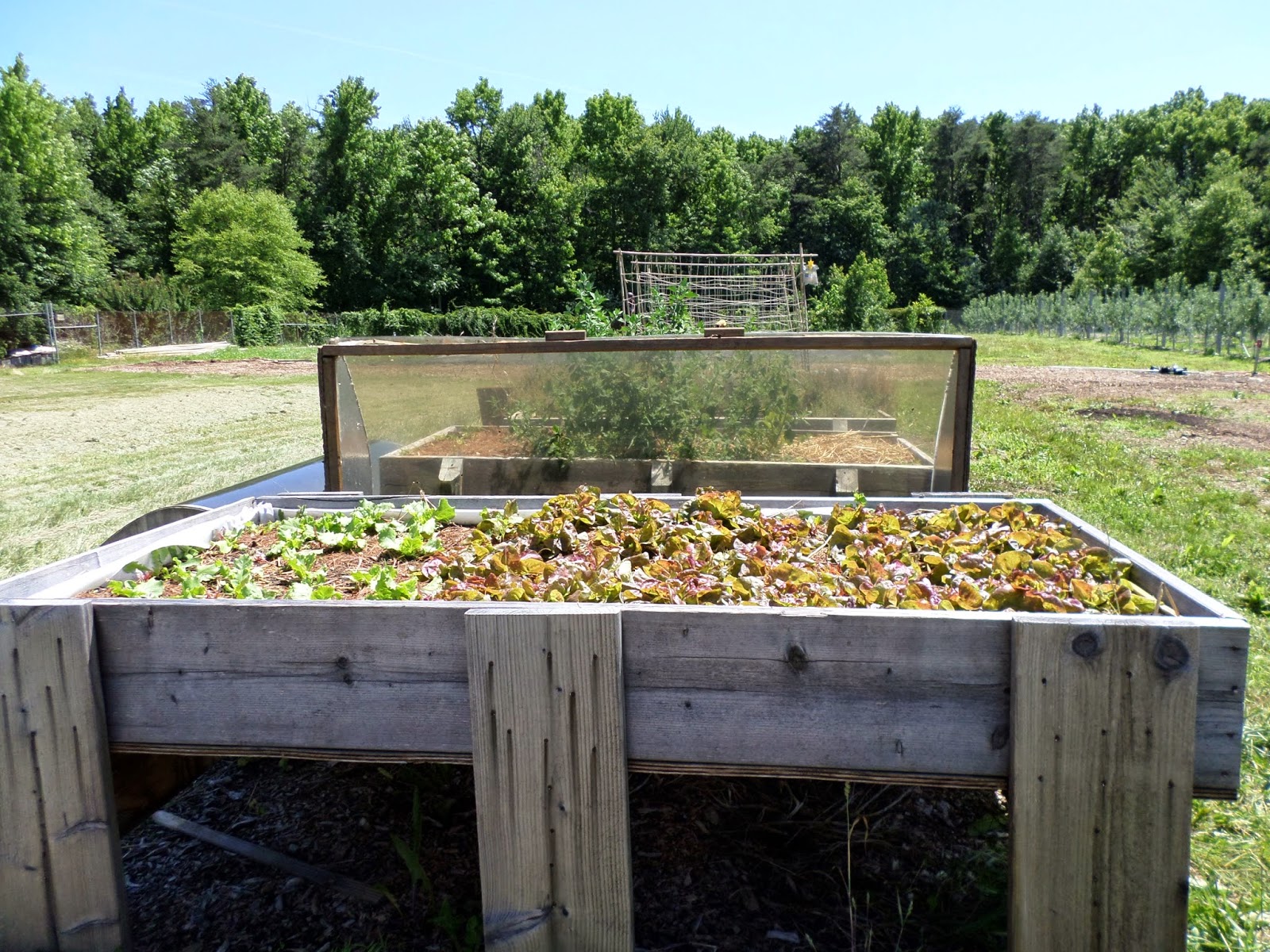 City growers who visit to the farm are often surprised to learn there is often an easy solution to their problems. Covering the crops during extreme weather, using trellises to keep crops off the grounds and weeding regularly, alternating mixed crops to maximize space - these are techniques that would be easy for the average urban gardener to implement.

Tip: Perennials like Egyptian onions, asparagus, Jerusalem artichokes, do not have to be planted each year. These are good vegetables for the novice gardener to grow.

Cover crops are used to suppress weeds. Muirkirk Farm uses a kind of sweet clover, because it germinates when it's warm. Visitors to the farm will see an experimental field, half of which has been covered with clover. The difference in soil quality is analyzed for future planning purposes.

The clover is planted in the summer to help suppress weeds. I thought clover was a weed? you may be thinking. "A weed is a plant growing where you don't want it, but it doesn't have to be a weed," explains Axum.

Clover is in the legume plant family, which absorbs nitrogen from the air through their leaves, and stores the nitrogen in the roots. After the clover is cut and tilled back into the soil, the nitrogen is released. Hence, not only are you getting free and organic fertilizer, but the soil is being protected from weeds and aerated.

Fact: This technique is presently being used with Muirkirk's the asparagus crop.

Initially, the farm's purpose was research and demonstration, but expansion and increased production led to selling produce for income generation. Since 2013, the largest client has been the Hay-Adam's Hotel.

"We wanted to be a part of the CAUSES initiatives to increase local food production and to serve our local community at the same time," says Hans Bruland, Vice President and General Manager of The Hay-Adams," and this partnership also benefits our clients. There is nothing better than food that was harvested in the morning and is served that same evening; better yet when some of the food reminds you of home – even if home is on the other side of the globe."

Fact: The partnership was featured in the Food section of the Washington Post.


Increased production and expansion has been a tremendous asset, yet it has led to capacity-related challenges. While the farm can boast of several volunteers both individual and group, but operations are ultimately managed seven days a week by Che, Waggie and Roy. 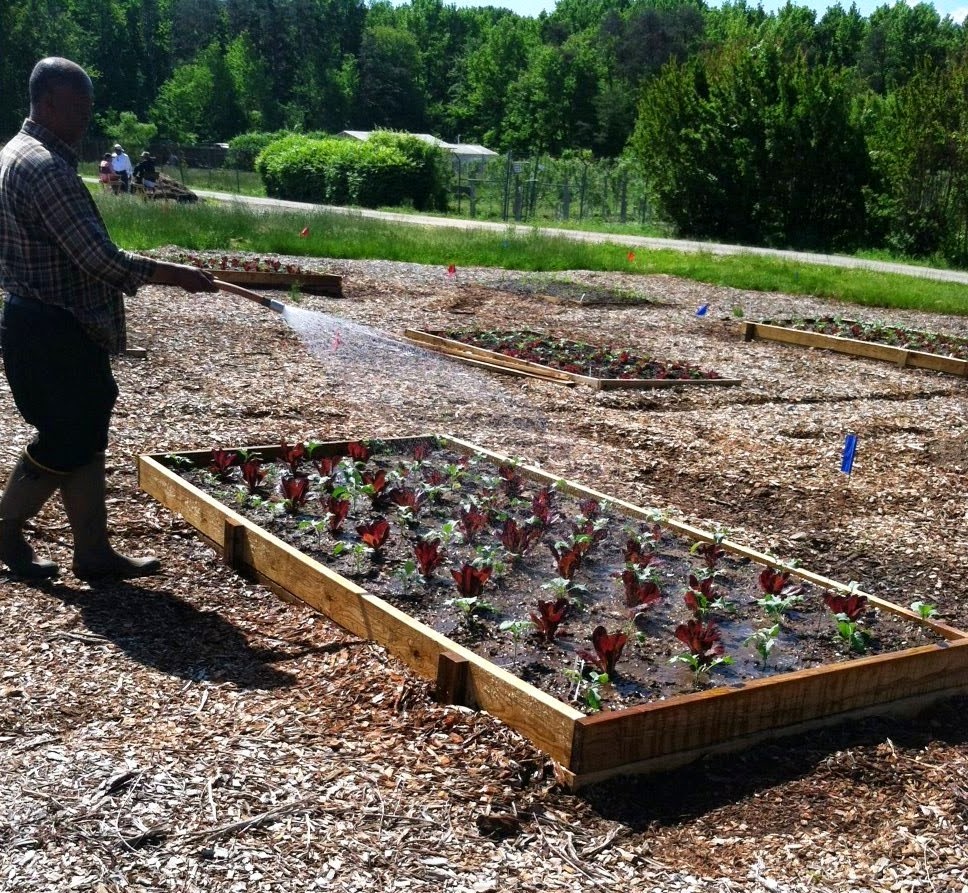 "At the end of the day when the smoke clears, it's three people. When I tell people that, they usually respond: 'You've got to be kidding," says Axum. "For now, I have to select crops we can plant and easily manage--although sometimes that's an oxymoron."

Harvesting the fruits of their labor also proves a challenge, as Axum explains. "When we harvest, everything else stops." In this case, "everything" includes:  weeding, planting, cultivation of the field, pest management.

As a land grant university, UDC receives money from DC taxpayers and the federal government.  As such, priority must be given to DC residents for sale of the produce. However, the lack of transportation capability makes it difficult to find clients in the city.

Lack of personnel and transportation capability are barriers to expanding the clientele base. Having a small staff makes it especially difficult to make deliveries--especially when you account the time if could potentially take from Beltsville to DC with the area's infamous traffic. Should the farm develop a suitable delivery system then the list of possible clients grows.

For now, while the farm is open to future contracts and partnerships, buyers will have to pick up their own produce. "We'll harvest and refrigerate it, but we don't have the capacity to make regular deliveries."

The farm donates produce to groups that feed D.C.'s vulnerable and underserved populations like Bread for the City and DC Central Kitchen, both who do regular pick-ups. We have also donated produce to various events, including 110 pounds of fresh greens to the NBC Food4Families 2013 holiday campaign. 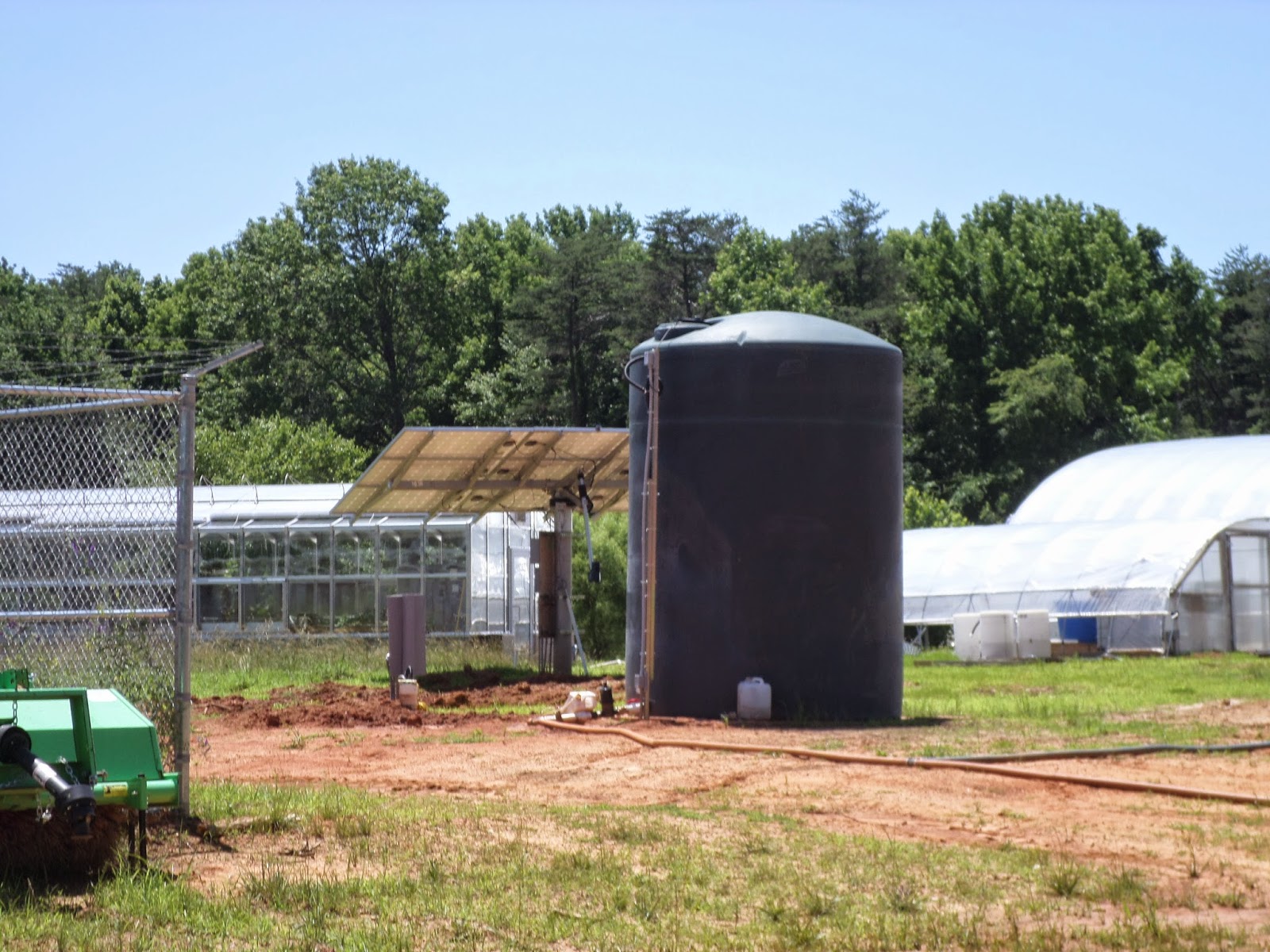 In the future, Muirkirk farm will use the fish waste produced from the aquaponics production facility in place of store bought fertilizer. An additional solar well pump will be installed to meet increased capacity as the farm grows. And once the composting production starts, the farm will be able to produce its own compost and immediately apply it to the farm fields. Now that's how you run a sustainable farm. 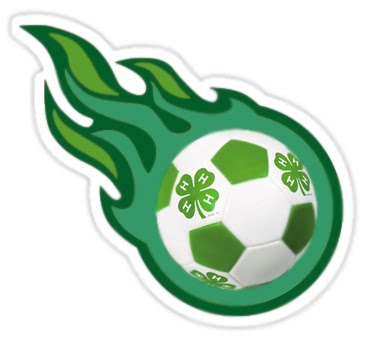